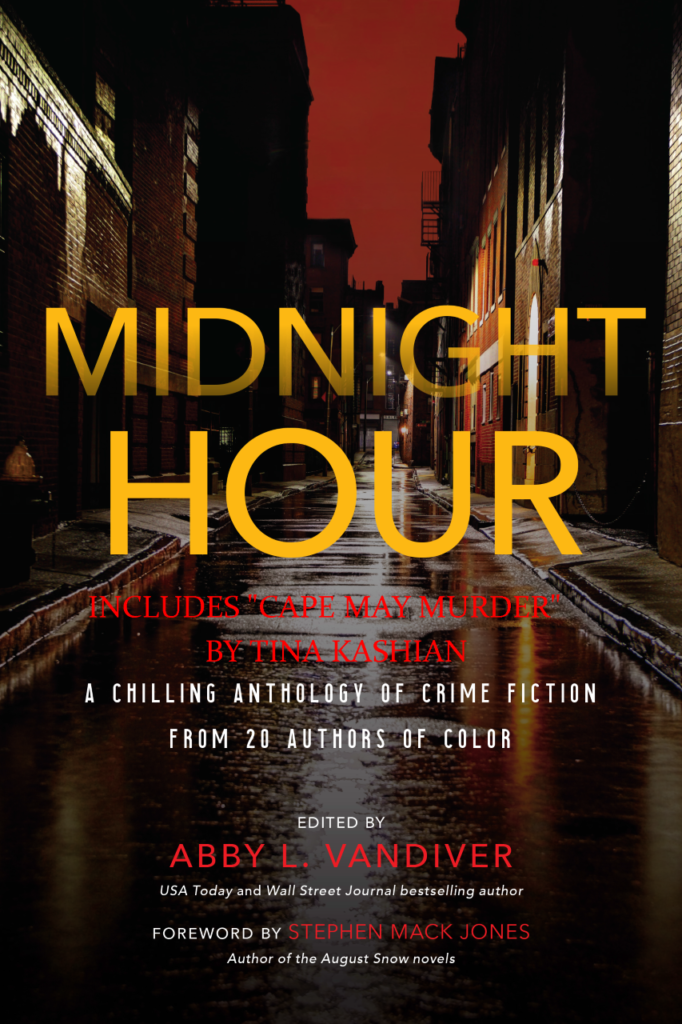 From Tina Kashian: On a Cape May, NJ beach vacation, two young mothers seek rest and relaxation at a Victorian bed and breakfast. But when death strikes, they find themselves accused of murdering the owner of the establishment. Smart moms, Sona Simonian and Priya Patel, decide to get to the bottom of the murder before their time at the Jersey shore turns into time in the slammer.

Praise for Midnight Hour:
“[A] wonderful all-original anthology . . . Full of varied voices, this volume is a must read for mystery aficionados.”
—Publishers Weekly, starred review

“An excellent collection of stories told from many different viewpoints.”
—Kirkus Reviews

“Midnight Hour is an absorbing anthology that exhibits the range and talent of some of crime fiction’s most interesting writers. Full of vim and intrigue, fun and horror, these stories explore the suspenseful possibilities of trouble at midnight.”
—Steph Cha, award-winning author of Your House Will Pay

“A magnificent collection of the work of truly fine writers. Each story is  unique and compelling, and lingers with the reader. Midnight Hour is simply extraordinary.”
—Sulari Gentill, award-winning author of the Rowland Sinclair mysteries

“A collection of stories that made my jaw drop with each clever ending, Midnight Hour offers a thrilling selection written by and about people of color that will keep you reading until well past the dead of night.”
—Elle Marr, bestselling author of The Missing Sister and Lies We Bury

END_OF_DOCUMENT_TOKEN_TO_BE_REPLACED

Stories in this Anthology:

Tina Kashian – Cape May Murder – On a Cape Many, NJ beach vacation, two young mothers seek rest and relation at a Victorian bed and breakfast. But when death strikes, they find themselves accused of murdering the owner of the establishment. Smart moms, Sona Simmonian and Priya Patel, decide to get to the bottom of the murder before their time at the Jersey shore turns into time in the slammer.

Tracy Clark – Lucky Thirteen – Sometimes things aren’t always what they seem. Sometimes you jump to conclusions, and the stars align, for only the lucky one. In Lucky Thirteen, on one fateful New Year’s Eve, a simple robbery goes horribly wrong, as predator and prey come face to face. A gun. One last meal. And only one survivor left to ring in the new year. Predator or prey?

Abby L. Vandiver – The Bridge – Evie wants to be free of all that incumbers her, one of those things is her husband. And the only way she knows to get rid of him is to do it permanently, so she gets someone to do it for her. But everything isn’t as it seems and may not work out exactly how Evie planned.

Callie Browning – Dead Men Tell No Tells -A lover. A wife. A Prime Minister One turns up dead at midnight in a secret love dungeon and there is only one way out for the other two.

Frankie Bailey – Nighthawks – The year is 1949, the place is upstate New York. Public health nurse Jo Radcliffe has an encounter with a deer while driving home. Battered and shivering, she walks into a diner where three nighthawks have gathered, and a murder is about to occur.

A. Aymar – The Search for Eric Garcia – The story of a wounded angry man determined to kill the person his wife left him for. Along the way, he encounters a series of choices and is led to wonder, as the story comes to a close, if he really had a choice at all.

V.M. Burns – The Vermeer Conspiracy – Jasper Bland was once an aspiring artist before a midnight art heist and years of secrets sent his career down a different path. Decades later, eaten away with bitterness, he comes face to face with the source of his angst. How far will he go for a chance to restore a dream?

Delia C. Pitts – Midnight Confidential – A big city police interrogation room becomes a hot box of lies for a dirty cop and her sketchy confidential informant. Detective Denise Barnett is as corrupt as they come, mixing street smarts with cold fury to get the revenge she craves. Her snitch, Tubby Rooney, is trapped, shedding sweat as fast as he dumps damning information. Barnett’s lieutenant wants answers, the detective wants silence, her informant wants out. Will everyone be destroyed in this dance of deception?

Faye Snowden – Chefs – A middle-aged man dating his best friend’s wife will discover the one thing he’s never tried after the stroke of the dark midnight hour.

Jennifer Chow – Midnight Escapade – After years of silence, two women decide to meet up in a unique escape room but get trapped in a far deadlier game than they’d anticipated.

H.C. Chan – Murderers Feast – Men had been murdered for less. And yet techpreneur John Manley, a sneering braggadocio who has left a trail of duped VC investors, bankrupted cohorts and damaged women, still lived. What could possibly happen when two hundred of his closest enemies gather in a five-day exclusive gourmet retreat, in this tale of Silicon Valley noir?

Forest Jones – The Winston Mystery – Walkerton, North Carolina private investigator, Vaughn McKay is asked to help a woman who believes her husband is trying to poison her. Is it paranoia? Or is something more sinister happening in the old tobacco city of Winston-Salem.

Gigi Pandian – The Diamond Vanishes – A cursed diamond, a midnight séance, and an impossible crime . . . Stage magician Sanjay Rai, aka The Hindi Houdini, reluctantly agrees to perform a fake séance as part of his act. But when one of the participants vanishes from a locked room, he and Jaya Jones must unravel a dark deception connected to India’s legendary Koh-i-Noor Diamond.

Elizabeth Wilkerson – A Change of Plans – Kamilah, an ex-pat living in Tokyo, races against the clock to rebuild her life while an unseen enemy targets her for destruction.

Stella Oni – The Black Widow of Oshogbo – A serial killer is on the loose and killing able bodied young men in the prosperous town of Ilaje in Oshogbo.  The signature of the killer was a cut to the Achilles heel, stab wound to the chest and deep bite marks to the male private part.   With time ticking on the investigation and no solution by the police, Ex British Army officer and Detective agency owner, Lara Bola is called by the State Secret Service to investigate.

Marla Bradeen – The Witching Hour – Bad things always seem to happen to Joan Nguyen during the witching hour. This time, the unexpected death of her father unleashes some shocking family secrets that threaten to shake up her world forever.

Christopher Chambers – In the Matter of Mabel and Bobby Jefferson – It’s almost midnight, it’s snowing, and a bored call center worker alone with hours to go in his shift catches a customer inquiry that smells of a murder plot for insurance money. Is he a knight, rescuing the intended victim…or someone else’s pawn? Poor, poor “Jake… from State Farm.”