Murder in the Mountains

Murder in the Mountains – A Kebab Kitchen short story 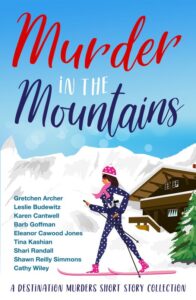 With mountainous murders galore around the world, this anthology is full of peaks and valleys!

Climb every mountain, search low and high
For clues to a murder, and try not to die

A KILLER POCONO HIKE is a short story in the Kebab Kitchen series. Lucy Berberian is desperate for a break from the stress of wedding planning, and a short getaway to the Poconos with her BFF Katie Watson should have fit the bill. But finding a body in a sinkhole leaves Lucy with a sinking feeling.

END_OF_DOCUMENT_TOKEN_TO_BE_REPLACED

Four seasons of Murder:
Spring
DOUBLE BLUFF by Gretchen Archer. A new short story in the Davis Way series. Two trophy wives and one dead body equals a trip to Lookout Mountain, Tennessee for Davis Way and her co-worker.
FIVE DAYS TO FITNESS by Barb Goffman. A visit to a fitness camp in the Virginia Blue Ridge Mountains was supposed to be a new beginning for Bree Winterbourne. Instead, it’s a final ending for one of the attendees.
Summer
THE SOUND OF MUZAK by Karen Cantwell. Another short story in the Barbara Marr series. When Barb and friends take a trip to the Berkshire Mountains in Massachusetts, they are asked to help uncover the owner’s dark past—one that may involve murder.
THE PICTURE OF GUILT by Leslie Budewitz. A new short story in the Food Lovers’ Village series. Erin Murphy loves her town of Jewel Bay, Montana, which attracts artists, foodies, and other tourists. But one artist’s visit turns deadly.
Fall
THE LYIN’ WITCH IN THE WARDROBE by Eleanor Cawood Jones. Lorrie George and friends visit the Land of Oz theme park on Beech Mountain, North Carolina, filled with celebrities and jealousy and murder, oh my!
A KILLER POCONO HIKE by Tina Kashian. A short story in the Kebab Kitchen series. Lucy Berberian is desperate for a break from the stress of wedding planning, and the Poconos should have fit the bill. But finding a body in a sinkhole leaves Lucy with a sinking feeling.
Winter
A PERFECT CLIMB by Shawn Reilly Simmons. A skiing trip in the Australian Alps was supposed to be the perfect start for Caroline Cabot’s perfect marriage. Unfortunately, everything quickly goes downhill, as sore muscles, fighting couples, and a murder ruin the perfection.
THE EDELWEISS EXPRESS by Shari Randall. A new short story in the Lobster Shack series. Allie Larkin was looking forward to her trip to Austria: the snow, skiing, and a Sound of Music Tour. But she wasn’t expecting that the hills would be alive with the sound of…murder?
ONE FLEW OVER THE COCOA’S NEST by Cathy Wiley. A new short story in the Food Festival Fatalities series. Former celebrity chef Jackie Norwood was invited to judge a Hot Cocoa festival at a Utah ski resort. Instead, thanks to a blizzard and a murder, she ends up judging the guilt of her fellow guests.