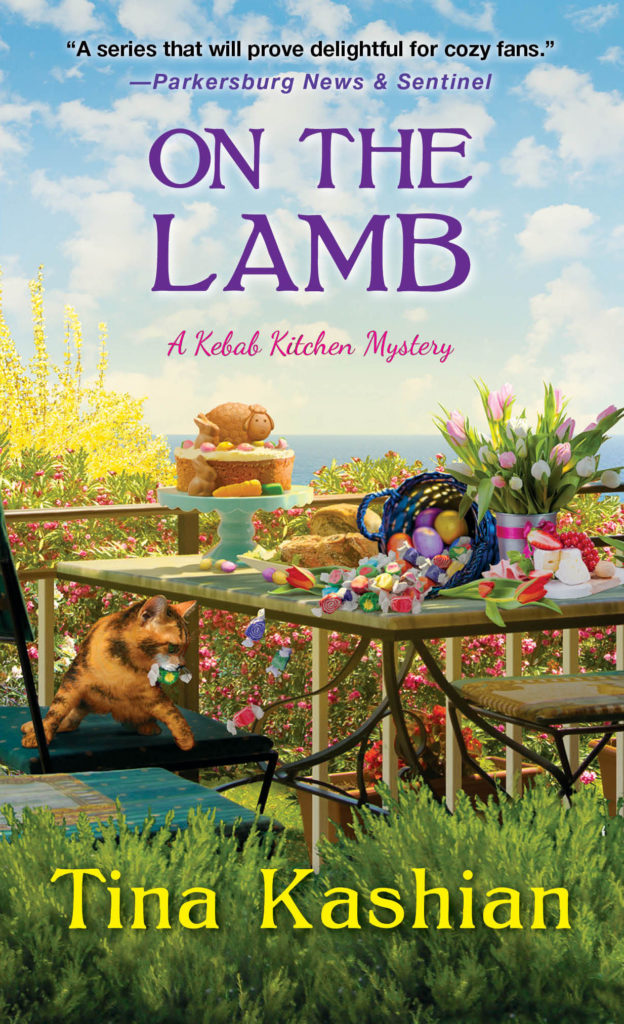 Lucy Berberian is busy preparing her family’s Mediterranean restaurant for Easter on the Jersey Shore—but a batch of sweets is to die for . . .

Bikers are thundering into the seaside town of Ocean Crest for the annual Bikers on the Beach gathering that raises funds for injured veterans. It’s a big boost for the Kebab Kitchen, as well as for local businesses like Melanie Haven’s candy shop. But Melanie is about to find herself in a sticky situation.

When Melanie and Lucy attend a beach bonfire, a local landlord is found dead after apparently choking on a piece of salt water taffy. Melanie, who was known to have a contentious relationship with the victim, is quickly skewered as the prime suspect. But Lucy is determined to prove her friend’s innocence before the real killer coasts free . . .

“Clever and charming . . . A culinary delight that will have readers salivating over the food and hungry for literary answers.”
—RT Book Reviews, 4 Stars, on Hummus and Homicide

“Saturday night is going to be one killer night out.”

Lucy Berberian had just finished stacking menus on the hostess stand when Sally, a long-time waitress, bounded over. “It has been a while since our last beach bonfire,” Lucy said.

Sally pulled her waitress pad from her apron pocket and set it on one of the tables. “It’s been longer than a while. This winter seemed endless, and you’ve put long hours into learning the ropes here. You deserve to have some fun.”

It was true. Since the summer, Lucy had worked overtime as the manager of Kebab Kitchen, her family’s Mediterranean restaurant in Ocean Crest, a small Jersey shore town. But it was now early April. Winter had come and gone, along with numerous holiday festivities at the beach. A warmer breeze blew from the Atlantic Ocean, one of the first signs of spring at the shore. It was a long-awaited and delightful change. Soon Easter would arrive, along with town-wide egg hunts, church services, and family celebrations.

The swinging kitchen doors opened and Lucy’s sister, Emma, carrying a tray of empty salt and pepper shakers, stepped into the dining room. “Are you two talking about our night out?” She eyed them as she set the tray on the waitress station. “You bet,” Sally said. “I’ve been telling Lucy she needs a break from work.”

Emma slipped on a red waitress apron emblazoned with the Kebab Kitchen logo in black letters and tied it behind her. “Well, it was nice of your friend, Michael, to invite us to join his motorcycle riding friends at their beach bonfire, Lucy. I know I’m tired of being cooped up inside. It’s perfect timing, too, before the season starts and it becomes crazy busy in town.”

Lucy knew what her sister meant. In a little over two months, Memorial Day would arrive, summer would officially start, and the small shore town would triple in size. A parking spot would be hard to find, even a metered one. But before then, one more town wide event would seize Ocean Crest—Bikers on the Beach.

Motorcycles from all over New Jersey and neighboring states would ride to the beach to raise money for injured veterans. It was a worthy annual cause, albeit a loud one. Her parents, Angela and Raffi Berberian, often complained about the noise of too many Harley-Davidsons roaring down Ocean Avenue.

Lucy didn’t mind the noise or the additional business for the town. The restaurant’s neighbor and Lucy’s friend, Michael Citteroni, ran the bicycle rental shop next door to Kebab Kitchen. He also owned a black-and-chrome Harley. Michael had invited Lucy and her girlfriends to a celebratory beach bonfire—the night out that Lucy was looking forward to just as much as her sister and Sally were.

Sally and Emma began filling the salt and pepper shakers and placing them on trays to deliver to the tables. It was the lull between the lunch and dinner shifts, and the family-friendly restaurant was quiet. Each table was perfectly set with a white linen tablecloth, sparkling glasses, a votive candle, and a vase of freshly cut flowers. Several maple booths situated in the corners were perfect for a couple’s date night out. Cherry wainscoting added additional charm to the dining room. A low wall separated a waitress station from the dining area, and a pair of swinging doors led into the kitchen.

But it was the large bay windows that drew the eye and revealed the gem of the town—the spectacular ocean view. Seagulls soared above the water and a pristine beach stretched on for miles to the next Jersey shore town and beyond. In the distance was the boardwalk and the pier with an old-fashioned wooden roller coaster and Ferris wheel.

“Should I wear a bathing suit under my clothes at the bonfire?” Sally asked as she moved a vase aside to make room for the salt and pepper shakers.

Lucy shook her head. “I wouldn’t. The ocean’s too cold to swim and no one plans on braving a cold dip at night.”

“Too bad. You mean no skinny-dipping like we all did way back in high school?” Sally teased.

“Good grief. Those days are over,” Emma said. “But do you think Michael’s friends are as good-looking as he is?”

Lucy rolled her eyes. “What kind of question is that?” Her sister was married to Max, a real estate guru in Ocean Crest, and they had a ten-year-old daughter, Niari.

“I know I’m a married lady. But I’m not blind,” Emma insisted. Small-boned and rail-thin, with brown hair, at thirty-seven, Emma was five years older than Lucy.

The sisters had similar petite builds, but Lucy had deep brown eyes and shoulder-length, curly brown hair. The heat from the kitchen and the summer humidity made it even curlier. She would never call herself rail thin, and working with food all day—combined with her love of lemon meringue pie from Cutie’s Cupcakes—were reasons she jogged the Ocean Crest boardwalk three times a week to stay trim.

Sally jokingly pushed Emma aside. “Well, I’m not married or blind.” Sally was tall and willowy, with dark, pixie-style hair.

Lucy chuckled. How she loved these two. They made working at the restaurant fun.

“I invited Melanie Haven to join us,” Lucy said.

Sally glanced at Emma. “Can you convince Melanie to bring along some candy?”

“Are you kidding? I already asked her,” Lucy said.

Melanie owned Haven Candies on the boardwalk. When Lucy jogged the boardwalk, she longingly passed the candy store on her route. The saltwater taffy was a favorite with locals and tourists alike. As a kid, Lucy used to gaze wide-eyed in the window of the candy store as the candy maker stretched the taffy or made huge batches of fudge in big copper pots. Whenever fudge samples were handed out outside the shop, Lucy would sprint to snatch one.

The swinging kitchen doors opened and Azad Zakarian, the head chef of Kebab Kitchen, approached carrying a tray loaded with plates. “Ladies, I have tonight’s specials for tasting. Mediterranean couscous salad and falafel as appetizers. Filet kebab and grilled grouper as main dishes. For the hummus bar, we have pine nut hummus, olive hummus, and traditional hummus.”

Lucy’s heart skipped a beat at the sight of both the food and the man. Tall, dark, and handsome, Azad cut an imposing figure in his crisp, white chef’s coat. She’d recently taken a leap and started dating him again. According to Madame Vega, the tarot card reader on the boardwalk, it was either a wise decision or a dangerous one.

The three women wasted no time in grabbing forks and tasting. The Mediterranean couscous salad was bursting with flavor from kalamata olives, cucumbers, and tomatoes in a lemon and olive oil dressing, and the falafel’s fried chickpeas had just the right crunch. The filet kebab was perfectly seasoned and melted in their mouth, and the grouper was light and flaky.

“Yum. It’s all delicious.” She looked up to catch Azad’s grin, and her gaze was drawn to the sexy dimple in his cheek. She cleared her throat and forced herself to look at the food. “Perfect timing. The hummus bar is almost empty.”

“I’ll do it,” Emma said as she took the bins from the tray, then headed to the corner of the dining room where the hummus bar was located. It was one of the most popular features of the restaurant, and the varieties of hummus changed daily. There were vegetables for dipping, and fresh pita bread could be ordered from the kitchen

Azad pointed to the other plates on the tray. Lines of concentration deepened along his brows, and Lucy knew he took his position as head chef seriously. “The grouper is fresh, straight from the fish market,” he said. “I only hope we have enough for—”

A loud crash sounded from the kitchen.

Lucy started. “What the heck was that?”