Stabbed in the Baklava

Book 2: Stabbed in the Baklava 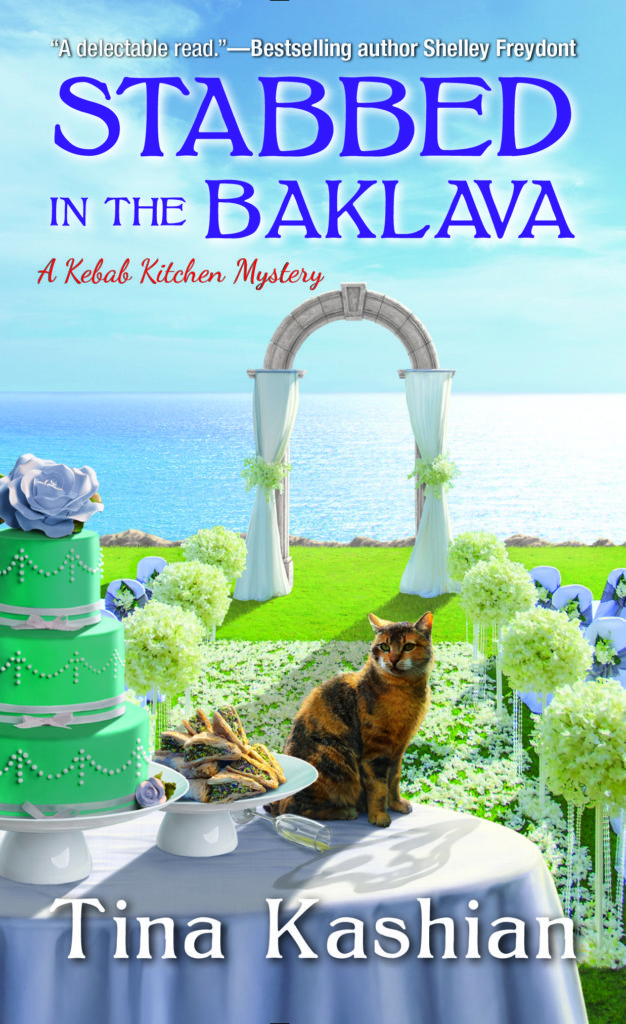 Lucy Berberian has taken over her family’s Mediterranean restaurant on the Jersey Shore after an unsatisfying stint at a Philadelphia law firm. It’s great to be back in her old beach town, even if she’s turning into a seasoned sleuth.

Catering a high-society wedding should bring in some big income for Kebab Kitchen—and raise its profile too. But it’s not exactly good publicity when the best man winds up skewered like a shish kebab. Worse yet, Lucy’s handsome ex, Azad—who’s the restaurant’s new head chef—is the prime suspect. But she doesn’t give a fig what the cops think. He may have killer looks, but he’s no murderer. She just needs to prove his innocence, before he has to go on the lamb . . .

Chosen by reviewers and readers as a Fresh Pick at Fresh Fiction!

“An enjoyable multi-lot story with a good setting, delicious foods, and a great cast of characters.” ~Dru’s Book Musings

“A fun cozy mystery that continues a great series. Grab a plate of hummus and some baklava for dessert and sit back and enjoy.” ~Carstairs Considers

“Tense yet fun, this second book in the series was entertaining to read. The motives and suspects are varied, secrets are revealed and Lucy has to escape personal endangerment once again.” ~Laura’s Interests

“If you are searching for a funny story with some delicious food, this is your book!” ~Varietas

“I greatly enjoyed the bits and pieces of Mediterranean food, music, and dances that the author weaves into the story. It adds an authentic touch to the theme and will leave the reader hungry for a taste of the delectable food served at the Kebab Kitchen!” ~Cinnamon, Sugar and a Little Bit of Murder

“With a cleverness worthy of the mystery world’s greatest authors, Tina Kashian filled STABBED IN THE BAKLAVA with suspects, clues, twist and turns, and red herrings enough to keep me guessing until the end!” ~Lisa Ks Book Reviews

“Well-plotted and lots of fun, the mystery and the characters will keep you fully engaged from start to finish!” ~Reading Is My SuperPower

“. . .  a quaint small town, charming characters and food descriptions that will have you salivating.” ~The Avid Reader

Stabbed in the Baklava

“Took you long enough to fetch one extra tray of baklava from the catering van, Lucy. Dessert service is just about to start,” Azad mumbled as he cut a tray of baklava in diamond-shaped slices. The pastry smelled delicious, a rich combination of butter, chopped walnuts, cinnamon, and flaky phyllo dough, and Lucy was momentarily distracted. A large jar of simple sugar syrup was on the counter waiting to be poured over the cut baklava. She’d be sure to have a piece as soon as this wedding was finally over.

Azad halted his work to glare at her. “What? You want a piece now?”

With a huff, Lucy slapped the catering van key on the counter and walked away. She wanted to tell him that the wedding had more drama than a soap opera, but decided against it. No sense bringing up the subject of the best man, Henry Simms, right now. Azad had reacted quite strongly the first time he’d encountered Henry.

Hours later, Lucy had forgotten the argument between Henry and the wedding planner, Victoria. After serving twenty trays of baklava and wedding cake, they’d bagged slices of leftover cake and baklava for the guests to take home. When all the work was finished, Lucy let out a big sigh of relief. She pulled a stool up to the work counter and sipped a glass of water. Her lower back ached and her feet throbbed. Now that their catering work was done they could leave. The band was booked for only one more hour, and the staff of Castle of the Sea would remain to clean up the ballroom.

Katie joined her with a plate of leftover wedding cake. She took a bite and shut her eyes. “Hmm. This is good.” She set down her fork and patted Lucy on the back. “Congratulations! Your first catering foray for Kebab Kitchen was a huge success.”

“Thanks, but I couldn’t have done it without you, Azad, and Butch.”

Katie thrust her plate of cake at Lucy. “Have a bite while I sneak into the ballroom to see if there’s extra champagne to celebrate.” She pushed back her stool and headed out of the kitchen and into the ballroom.

Butch approached and smiled, his gold tooth flashing beneath the fluorescent lights. “Your friend is right. You did good, Lucy Lou.”

Azad had a bemused look on his face. “I have to agree. Great job with the servers, Lucy. Butch and I were able to focus entirely on the food while we knew you would handle the rest.”

Lucy smiled at the praise. She also knew better than to hug him. She’d struggled to shut out any awareness of Azad and it was best to avoid physical contact.

“I meant what I said. You both did the lion’s share of the work. I can’t cook and you two know it,” Lucy said.

It was an opening for Azad to tease her, but he didn’t. Instead, he took off his chef’s hat, ran his fingers through his dark locks, and said, “We better start packing before that testy wedding planner returns. I’ll get the rolling carts from the van.” He picked up some clean pots and pans and departed through the back door.

She stared after him with a frown. She knew he was right. Why give Victoria Redding a reason to complain? Then why did she feel an odd twinge of disappointment that he hadn’t taken the opportunity to remind her of her lack of culinary talents? Did she actually miss his teasing? Had it become a form of flirting?

Swallowing the lump in her throat, Lucy busied herself by helping Butch gather the soup pots and equipment. But when Azad didn’t return after ten minutes, she frowned. How long could it take to roll a cart from the van into the kitchen? Had he been waylaid by Victoria in the parking lot? Was he getting a tongue-lashing as they waited? Or was she retrieving Henry’s cell phone from beneath the van’s bumper? Lucy wouldn’t put anything past the woman.

“I’m going to check on Azad,” she told Butch.

She jogged back to the van and slowed as she spotted Azad outside the van’s open back doors. One hand clutched the door, his knuckles white.

The hair on the nape of her neck stood on end as she came close. “Is everything okay?”

She looked inside and froze. There, splayed on the floor of the van, was Henry Simms, stabbed in the neck with a shish kebab skewer.