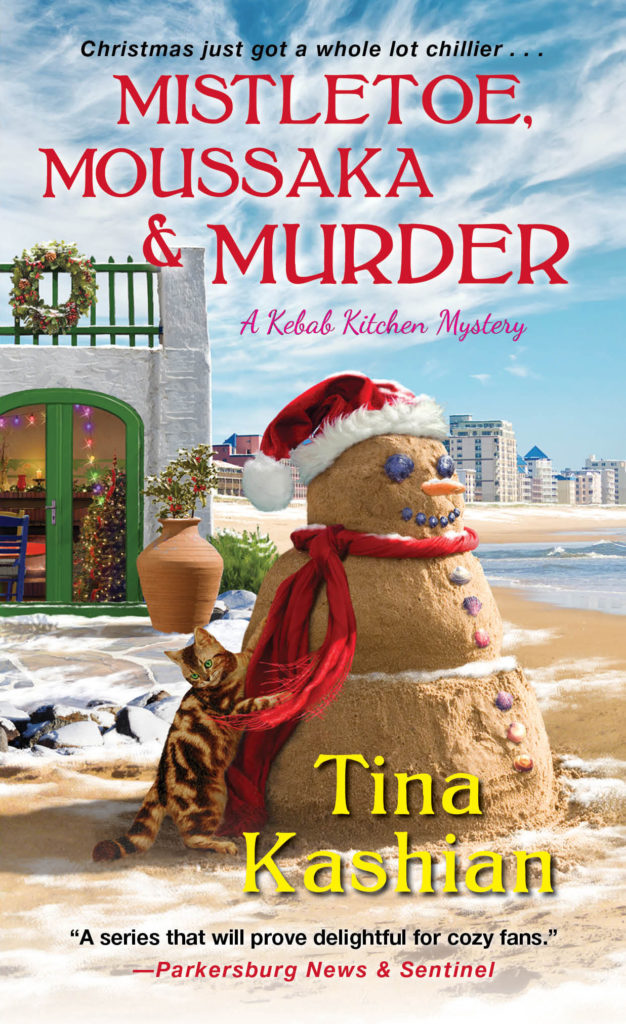 Not even her impending nuptials can keep Lucy Berberian, manager of her family-owned Kebab Kitchen, from the Jersey Shore’s annual Polar Bear Plunge. But her dive into the icy ocean is especially chilling when she finds a fellow swimmer doing the dead man’s float—for real . . .

Who would kill a man in cold blood during Ocean Crest, New Jersey’s most popular winter event? When Lucy learns the victim is Deacon Spooner, the reception hall owner who turned up his nose—and his price—at her wedding plans, she can’t help wondering who wouldn’t kill the pompous caterer . . .

Perhaps the culprit is the wedding cake baker whose career Deacon nearly destroyed? Or the angry bride whose reception he ruined? With her maid of honor, Katie, busily planning Lucy’s wedding without her, Lucy will have to get to the bottom of this cold-hearted business in time for Kebab Kitchen’s mouthwatering Christmas celebration—and before her hometown’s holiday spirit washes out to sea . . .

“Clever and charming . . . A culinary delight that will have readers salivating over the food and hungry for literary answers.”
—RT Book Reviews, 4 Stars, on Hummus and Homicide

A cold sea breeze blew across the beach. Lucy and Katie stood huddled together with a crowd of brave “polar bears.” It had snowed last night and about an inch of snow covered the sand.

Not for the first time since arriving that morning, Lucy eyed the ocean and wondered what the heck she’d been thinking to sign up for this year’s Polar Bear Plunge.

“The water temperature is only forty-six degrees,” Katie said, her nose red from the cold.

They both wore bathing suits beneath sweatshirts and sweatpants. They also each wore running shoes, not flipflops. Unfortunately, they weren’t going jogging on the boardwalk and would have to take off their clothes soon.

Lucy shivered and rubbed her hands up and down her arms. “Why did you have to tell me? I didn’t check for a reason.”

“Hey! You dragged me into this, remember? I’m afraid you’re going to have to tear my sweatshirt off.”

“That’s Bill’s job. I wouldn’t dream of depriving him of the pleasure.”

“He’s the smart one and is at work. Fifty bucks says he’s sitting at his desk inside a heated police station drinking hot coffee.”

“Stop whining. It’s for a good cause. We run in and run out. People have been doing this for years. How bad can it be?” If her voice hadn’t wavered, Lucy might have believed it herself.

Katie shot her a cynical look. “Sounds like you’re convincing yourself more than me.”

Lucy shifted her feet. Even if Katie was right, she didn’t have to point it out, did she?

The town mayor, Theodore Magic, also the owner of Magic’s Family Apothecary, walked to the head of the crowd carrying a bullhorn. Well into his seventies, Theodore was short and thin, with a shock of white hair and wrinkles and age spots on his face and arms. Instead of his pharmacist’s coat, he was dressed in khakis, a turtleneck, and a warm down vest. Lucy was jealous.

“Welcome to Ocean Crest’s annual Polar Bear Plunge!” Theodore spoke into the bullhorn. “A special thank-you to our brave Plungers. We have forty-six of you, and that’s an all-time high. This year’s event is extra-special because all your donations will benefit the renovation of the town’s senior center.”

The large crowd burst into cheers. The onlookers stood to the side, ready to show their support with towels, sweatshirts, and warm drinks. Lucy scanned the group until she found Azad. He’d left Kebab Kitchen early to be here for her. He waved and Lucy waved back. Eloisa stood next to him, dressed in a full-length, white faux fur coat with black spots that resembled Cruella de Vil’s dalmatian coat.

Smart lady for skipping this one.

A series of flashes made Lucy blink. Stan Slade had parked the Town News truck on the beach and the head reporter was taking pictures with his news crew. Short and stocky, with black-rimmed glasses, Stan was a heavy smoker, and a cigarette dangled from his lips as he held his camera. She hadn’t had a rosy relationship with the reporter in the past, but she was grateful for his presence today. Any publicity toward raising money for the senior center would go far. Other than the news van and police SUVs, no other cars were permitted on the beach.

One by one, the Plungers began to take off their clothes and shoes. Friends and family members came forward to take the items.

Together, Lucy and Katie removed their own running shoes and socks. Barefoot, Lucy stepped on the snow-covered sand. The shock of the cold was jarring. She sucked in a breath and gathered her courage. Next, they stripped off their sweat suits. Dressed in a one-piece Speedo swimsuit, gooseflesh prickled all over Lucy’s skin.

Azad and Eloisa approached to take their clothing.

“I’m proud of both of you. Remember, I have towels and hot chocolate waiting. Good luck!” Azad gave Lucy a quick peck on the lips.

“I’m glad you convinced me not to swim,” Eloisa said, then winked at Azad. “Plus, I just had my hair done.” She patted her bleached-blond hairdo with her free hand.

Lucy was too cold to think of a comeback. Instead, she scanned the group of swimmers. She was surprised to see many local business owners and their employees. The Polar Bear Plunge would benefit town seniors, and all the businesses contributed, whether in direct donations or by raising money by swimming. Ocean Crest residents helped one another.

Susan Cutie stood alongside her boyfriend, Jake Burns. Lean and handsome, with light brown hair, blue eyes, chiseled features, and a diamond stud in his left ear, Jake was always quick with a smile. His charm helped with his Boardwalk Brewery business.

Lucy recognized other locals as well. Ben Hawkins, the town barber, Harold Harper, a boardwalk shop owner, and Candy Kent, owner of Pages Bookstore, and many more were all looking cold and ready. She was taken aback to see Deacon Spooner. The arrogant catering hall owner was the last person she’d expect to participate.

“Time for the swimmers to approach the water,” the mayor called out. All forty-six brave people trailed behind Theodore to gather just out of reach of the surf.

Lucy’s toes curled in the cold, wet sand. “It’s like ripping off a Band-Aid. Make it quick and the pain will fade.”

“Where’d you hear that nonsense?” Katie asked, her gaze never leaving the ocean.

“This counts for lots of friend points.”

The breeze carried the tang of salt. The sound of the ocean wasn’t calming this morning, but ominous, as if to say, Enter if you dare.

The mayor raised his bullhorn once more. “When I count down from ten, everyone run for it. We’ll all be watching, and the Town News will take lots of pictures. Extra points for dunking your heads!”

“I pray I don’t suffer a heart attack,” Katie grumbled.

“Me too,” Lucy said. “I’m starting to doubt the wisdom of signing up.”

Katie gripped her hand. “I’ll let you know after this.”

Lucy and Katie found themselves in the middle of the sprinting crowd. At the first touch of the surf on Lucy’s bare toes, she gasped. Then the water hit her ankles and calves, knees and thighs.

“Keep going!” Katie shouted as she tugged her onward.

Lucy gritted her teeth and kept running. Waves hit her stomach, and her gut tightened and her muscles cramped. Then water splashed her chest and shoulders.

Katie gasped, then stumbled, but Lucy pulled her to her feet. “Almost there!”

A tall wave caught them both by surprise and splashed a good amount of water in their faces. Lucy let go of Katie’s hand. She sputtered, and both Lucy and Katie would have turned back and run for the beach, but the swimmers behind them were a human wall pushing them forward. The next wave went over their heads.

Lucy caught a mouthful of salt water. “Ugh!” She spit it out and rubbed the stinging water out of her eyes.

“Go back now!” Katie was already ahead of her.

Lucy didn’t need any encouragement and fought through fellow swimmers and the waves to reach the shore. She’d never been so cold in her life. In a wild panic, she searched for Azad but couldn’t find him.

Would she ever be warm again?

Then she saw Bill holding an outstretched towel for Katie. Wasn’t he supposed to be working?

She whirled to see Azad sprinting toward her. Thank my lucky stars! He wrapped the oversized towel around her and tugged her frigid body into his embrace. She wanted to weep with relief.

“You went in all the way. You’re my brave warrior,” Azad said.

Warrior? She wasn’t sure about that. She felt more like a frozen Popsicle. As for brave, she’d been forced forward by a human wall of wacky swimmers. In her panic to reach the beach, she hadn’t been able to identify a single one.

“Thank you,” she mumbled against his chest. He rubbed her arms and her back. He was blessedly warm and she was eternally grateful.

Eloisa hurried up to them and thrust a Styrofoam cup in her face. “Hot chocolate?”

“Thanks, Mrs. Lubinski.” Lucy accepted the cup and promptly burned her tongue on the hot drink. She didn’t care. At least one body part wasn’t numb.

“He said he couldn’t miss watching you two because he doubts Katie will ever do it again.”

“Are you going to do this again next year?” Azad asked.

Lucy smiled at her landlady, the first real smile since escaping the frigid Atlantic Ocean. “Today’s a huge success, then.”

And that’s when she heard the high-pitched scream.