I love food. I enjoy all types of cuisine—especially ethnic. You can say it’s in my blood. My Armenian parents owned a restaurant for thirty years near the Jersey shore and I grew up rolling silverware as a child, then working as a waitress and hostess as a teenager. My tips helped pay for my prom gown. We also vacationed at the Jersey shore every summer, and I have wonderful memories of building sandcastles, boogie boarding, and riding the boardwalk Ferris wheel with my siblings.

It was natural for me to set Hummus and Homicide, the first in the Kebab Kitchen Cozy Mystery Series, in Ocean Crest—a fictional Jersey shore town. I also knew I wanted to write about a quirky ethnic family who owns a restaurant.

When my editor at Kensington asked me what I wanted on my cover, I had lots of ideas. I envisioned a restaurant scene with hummus and pita on the table, of course. I pictured an ocean view through the window, but I also wanted a grapevine to showcase the restaurant’s Mediterranean cuisine (Greek, Lebanese, and Armenian). But I am not a graphic designer, and the rest of the cover was a pleasant surprise. I love the color scheme of greens, yellows, and blues. The skull and crossbones on the check adds a nice murder/mystery touch. I am also very fortunate to have a cover quote from one of my favorite best-selling mystery authors, Shelley Freydont, who writes the popular Celebration Bay Mystery Series. And the final detail? The calico cat named Gadoo (which translates as cat) lounging in the window sill.

I’m happy to share the cover with you and I hope readers find it attractive and preorder. 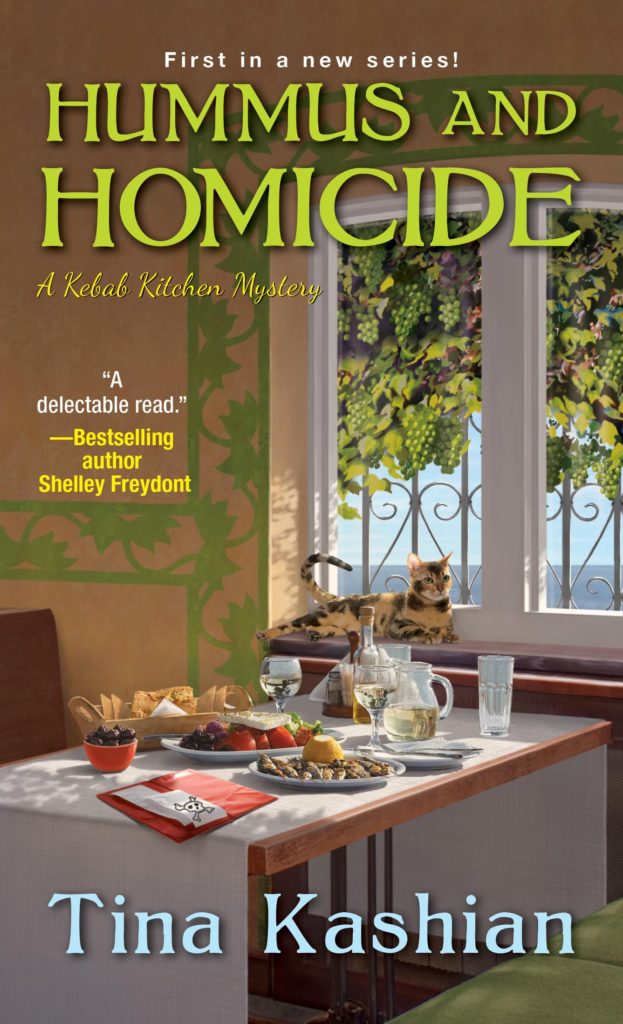 When Lucy Berberian quits her Philadelphia law firm and heads home to Ocean Crest, she knows what she’s getting—the scent of funnel cake, the sight of the wooden roller coaster, and the tastes of her family’s Mediterranean restaurant. But murder wasn’t on the menu…

Things are slow in the off-season in this Jersey Shore town, but Lucy doesn’t mind. She doesn’t even mind waitressing at the Kebab Kitchen. Her parents have put in a new hummus bar, with ever flavor from lemon to roasted red pepper. It’s fun to see their calico cat again, and to catch up with her old BFF, who’s married to a cop now.

She could do without Heather Banks, though. The Gucci-toting ex-cheerleader is still as nasty as she was back in high school…and unfortunately, she’s just taken over as the local health inspector. Just minutes after eating at the Kebab Kitchen—where she’s tallied up a whole list of bogus violations—she falls down dead in the street. Word on the grapevine is it’s homicide, and Lucy’s the number one suspect…
Recipes Included!