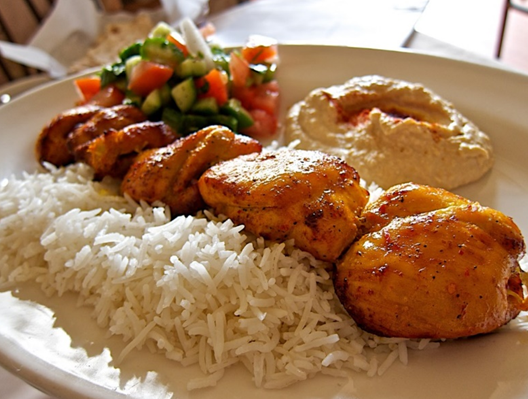 I grew up in an ethnic Armenian-American household. My mother was a talented cook and the grapevine in our backyard was more valued that any rosebush. I’d often come home from school to the delicious aromas of simmering grape leaves, stuffed peppers and tomatoes, and shish kebab. Sundays were dedicated to church and family gatherings around the kitchen table.

Basing my series at a restaurant was a sure fit for me, too. For twenty-eight years, family owned a restaurant in a small town in South Jersey. I worked almost every job—rolling silverware and wiping down tables as a tween, to hosting and waitressing for years afterwards. The hours were long, but the tips were good!

It was an interesting childhood. Lunch at school would be hummus and pita instead of peanut butter and jelly at a time when hummus wasn’t as popular as it is now. It wasn’t always fun as a teenager to have an eccentric, ethnic family, but I’ve grown to value my roots and my own colorful cast of family members. In contrast, my husband can almost trace his roots back to the Mayflower. We have two young daughters who have the best of both worlds, and yes, they both know how to make hummus and like it!

The first book in my Mediterranean Mystery Series is straight from my heart. Here’s a blurb of the book:

Tired of big-city stress, Lucy Berberian quits her law firm and heads home to the small town of Ocean Crest at the Jersey shore and her family’s Mediterranean restaurant, Kebab Kitchen. But things soon become as sticky as baklava syrup when faced with her match-making mother, a former flame, and her family’s old-world attitudes.

To make matters worse, when an old high school rival—the town’s new health inspector—ends up dead after eating at the restaurant’s hummus bar, Lucy is the prime suspect. Determined to clear her name and the restaurant’s reputation, she sets out to find the killer. With family tensions heating up in the kitchen, Lucy has to sift through a list of suspects and motives before someone else is served a killer kebab.

So there you have it! The series is all about family, food…and of course, murder.